IN 1986, STEVE Jobs was a guy trying to launch a start-up. Having been ousted from Apple the year before, he and a small band of employees were in the early stages of building a new computer company called Next. Jobs had invested millions in the venture, and his reputation as a visionary business leader was staked on its success. The group was still working out key details about its products. But Jobs was certain about one thing: He needed a logo from Paul Rand.

Perhaps more than any other single designer, Paul Rand was responsible for defining visual culture in America in the decades following World War II. He radically transformed advertising, blowing away the dust of the Depression era and pioneering a new, modern approach to selling products. He helped convince some of nation’s biggest corporations that good design was good business, crafting indelible logos for the likes of IBM, UPS, and ABC.

Everything Is Design, an exhibition at the Museum of the City of New York on display through July, collects over a hundred examples of Rand’s work, including magazine spreads, book covers, and product packages in addition to advertisements and logos. In every form, the work reflects Rand’s conception of good design, one which seems utterly obvious today but was largely foreign—at least in America—before Rand demonstrated it so convincingly. It was a simple idea: Graphic design can, and should, be both beautiful and functional.

A New Type of Ad Man

Born in Brooklyn in 1914, Rand was creative from a young age. He studied art at Pratt Institute in Manhattan and practiced drawing constantly. One of his first jobs was laying out product spreads for Apparel Arts, a popular men’s fashion magazine owned by Esquire. Soon after that he started doing magazine covers. His work was instantly noticed. By his early 20s, Rand was considered one of the most important designers of his generation. 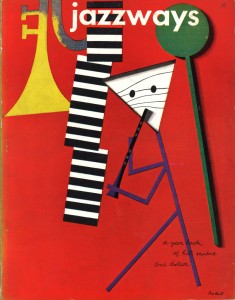 As art director and critic Steven Heller points out in his definitive monograph on the designer, Rand was one of the first American graphic designers to look to Europe for inspiration. As a student, he became obsessed with commercial arts journals from Britain and Germany, which featured cutting-edge work by graphic designers like A.M. Cassandre. Rand became a devotee of Swiss Expressionist Paul Klee. He absorbed new typographic theory from Switzerland and drank in the Modernist thinking on form and function coming out of the Bauhaus in Germany. These influences reflected in his work, which variously used—and often combined—collage, montage, hand-lettering, drawing and photography to bracing effect.

In 1941, at the age of 27, Rand was named chief art director of the newly-formed ad agency William H. Weintraub & Co. American advertising at the time had changed little since the late 19th Century, especially in terms of how the ads were conceived.

“Before Paul Rand, the copywriter was the lead,” says Donald Albrecht, the curator of the new exhibition. The copywriter would supply the words—often times a great many of them—and the words would dictate the layout of the ad, often drawn from one of several templates or formats. The visuals would be filled in later by commercial artists, who typically just illustrated whatever the copy was describing. Creativity was in short supply.

Inspired by the bold graphic work being done in Europe, Rand brought a radically different approach to the job. As he saw it, an ad’s effectiveness lay in the way words and images were combined on the page. “Rand’s ads have words and pictures, but they’re all fused into one symbol,” Albrecht says. Rand introduced a crucial new ingredient into commercial art: form. By paring down copy and breathing white space into his compositions, Rand made his advertisements stand out from the dense copy surrounding them. He embraced wit and humor, developing friendly hand-drawn characters for spirit-maker Dubbonet and the cigar company El Producto. He used bold, arresting colors. He signed every one of his creations. “He thought he was bringing art to advertising,” Albrecht says.

Rand’s reputation continued to grow. An ad that ran in the The New York Times in 1953 gives some sense of his stature. “Wanted: Art Director with a modern, creative touch. Need not be a Rand but must be able to inspire an art department.”